CCS has a long tradition of fielding competitive soccer teams. The boys varsity team won State Championship titles in 2001 and 2011. In 2018 and 2021 the boys team competed in the Elite 8 at the TSSAA State Tournament. CCS has seen many players continue to compete in college. Athletes compete at the varsity and junior varsity level in High School and Middle School. CCS also offers Lower School soccer for grades 3-5. 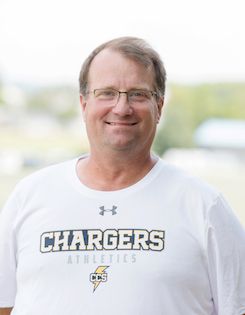 
Warren Smith is excited to return to CCS as the new Varsity Head Boys Soccer Coach and Middle
School Girls JV Coach. Warren taught and coached at CCS from 1987 to 1990 and again from 1997 to 2002. In 2001, he played a key role in CCS winning a TSSAA State Championship alongside David Stanton.


Smith graduated from Covenant College where he played soccer and received numerous accolades, including All District, All Area, All South, and team captain; he was also ranked in the top 15 in the nation in goal scoring during his junior year in the NAIA. In addition to his soccer experience, he currently holds a Premier Diploma awarded by the United Soccer Coaches Association of America. This has allowed him the opportunity to earn licenses from nationally recognized soccer coaches (e.g., Anson Dorrace, UNC; Tony DiCocco, USWNT) and goalkeeping credentials. His level of credentials are often reserved for DI college coaches or professional level coaches. As a result, he serves on a national academy support staff, traveling to do professional development for coaches.


Over Smith’s 30+ years of coaching, he spent time coaching professionally with the Chattanooga Railroaders in the USISL. During his professional tenure, he coached alongside Angus McAlpine, the US Men’s Olympic Coach in 1980. During his HS tenure he has coached several players that have achieved All-American status as high school student-athletes. He also coached two players (one boy and one girl) who have spent time with their respective US national team(s). During his tenure at St. Louis, he coached the Gatorade Player of the Year for the state of Missouri. Warren lives in Southside Chattanooga with is wife Annette.