Chargers Track & Field is able to offer athletes various ways to compete in athletic contests. Athletes can compete in sprinting, jumping, pole vault, hurdling, throwing, and distance events. The Fingerle Track & Field facility provides the nicest running/jumping surface in the Chattanooga area. Interested athletes would be part of a team with a long history of success at the State level. Over the years, numerous athletes have gone on to experience success at the college level as well. Athletes compete at the varsity and junior varsity level in High School and Middle School. CCS also offers Lower School track & field for grades 3-5. 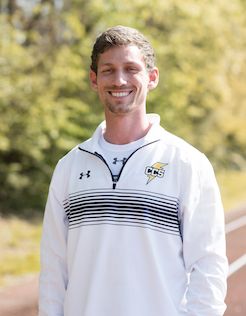 He has helped grow the CCS team from 23 combined athletes to over 60 and has coached his athletes to the State Meet each year with 8 State Runner-Up finishers, and 3 State Individual Championships. The girls track & field program has been a top 10 state ranked team since 2014, and in 2018 and 2019 the girls team placed 5th overall. In 2017 and 2018 the girls claimed back-to-back State Championships in the 4x200 meter relay.
Coach Russell has coached all running events from the 100-meter dash to the 3200-meter run, but specializes in sprints and middle distance. He holds a BA in Early Childhood Education from Berry College, completed his Master's of Athletic Administration from Ohio University, and holds a Level 1 USA Track & Field coaching certification and a USTFCCCA Technical Coaching certification.

Russell and his wife, Meredith, live in downtown Chattanooga, TN, with their son and daughter, Levi and Eleanor, and attend North Shore Fellowship in North Chattanooga.