The CCS softball program restarted in 2016. Since its return, the team has competed in the Final 4 at the TSSAA State Tournament 2 out of the last 3 years. In 2019, the Chargers were State Runner-Up, and all 3 Class of 2019 players are continuing their softball careers in college. Athletes compete at the varsity level in High School and Middle School. 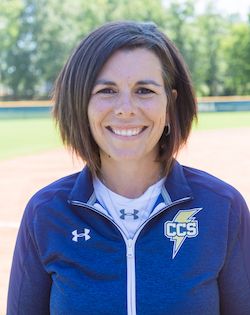 After 2 seasons, she returned to her alma mater, Carson-Newman, where she was the Assistant Softball Coach for NFCA Hall of Famer Coach Vickee Kazee Hollifield. While coaching there, she also completed her Master of Arts in Teaching. In 2010, she went to Lakeview-Fort Oglethorpe High School and served as Assistant Softball Coach for 2 years, Head Coach for 2 years, and Assistant Athletic Director for 4 years. This is her 5th year coaching softball at CCS.

Lisa and her husband, Thomas, live in Rock Spring, GA with their daughter, Gracie, who is a 1st grader at CCS.